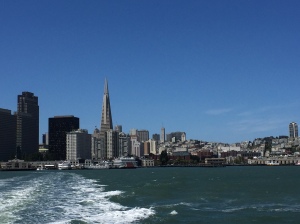 California had not been on my top-ten list of places to see and I feel bad about that now. Because California is as foreign and fascinating as anything outside the borders of this country. (Well maybe not anything, but it really is very cool and has a major “wow” factor for a northeastern gal like me.)

Cali became my destination because the PSI conference was in San Diego this year and, as a board member of Postpartum Support International, I am expected to go to the conferences. And why wouldn’t I go? They are awesome! So if (I thought to myself) I was going to go all the way across the country for a three day conference, why not extend the three days to two weeks and see some stuff.

Starting the trip solo was an adventure all in itself. I had to make all my own decisions about what to do, where to go, what to see. Doing this kind of “highlight” trip was a challenge to me because I wanted to miss nothing, but knew I had to. Once I released the anxiety of “what if I do the wrong thing?” (meaning what if this choice is not going to be as awesome as that choice would have been?) I just had fun.

I saw this as I drove into SF for the first time and thought it was there just for me. My great adventure.

My first stop was New York where I was to launch early on a Monday morning. The trip started off with my Uber driver picking me up at 5:00 a.m. then proceeding to Union Square to fetch my ride share, and driving him to JFK, even though my destination was LGA. Huh? Good thing I leave nothing to chance and had given myself an hour’s wiggle room. Still, I barely made it.

My first stop in CA was San Francisco. I was destined to love it, and I did. It’s a city, for one thing. Walkable and vibrant, like the city of my childhood, NYC. It is on the water – I almost cried when, driving my rental car from the airport, I went around a slow curve and saw an expanse of blue stretching out before me. It’s the perfect temperature. I wore a light sweater and sometimes a light scarf around my neck the entire time I was there. If the sweater came off, it always went back on. Constant breeze to cool and refresh.

I sensibly parked my car in a garage for the two nights I’d be there, walked a few blocks with my absurdly heavy suitcase, giant purse, and computer bag to the AirBnB I’d booked. It was completely barebones accommodations. But the room I stayed in had furniture! And my host left me towels and a key. Why would I need more?

First off, I learned quickly that when in a city for just one day, don’t bother to learn the public transportation system. A week, yes. A day—Uber. Despite my Uber-glitch in NYC I am basically in love with it.

So what I saw in San Francisco (in one day):

That night, my second in SF (I’d arrived at 7:00 the evening before), and after the epic day in which I did all of the above—I feared I was getting sick. I was flagging big time, felt clogged up and achy. I bought some empanadas at a stall in the Embarcadero, some NyQuil at a Walgreens, and headed to my AirBnB to eat in bed and put pix on Facebook. Slept a thousand hours and woke up in the morning feeling grand, ready to schlepp my not-lightly-packed belongings back to the garage and drive south.

One thought on “Solo in Cali part 1 (San Francisco)”