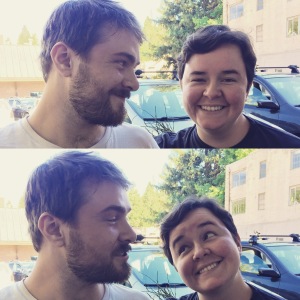 My kids being awesome

After a final day of experiencing the coolness of Nevada City, CA and Grass Valley, CA (where Win did find the most amazing fanny-pack for outdoorsmen and the Salvation Army and I bought some geological artifacts (aka crystals such as witch’s broom) at a local shop called The Cult of Gemini), Maggie and I said a temporary goodbye to her brother and we headed north again. 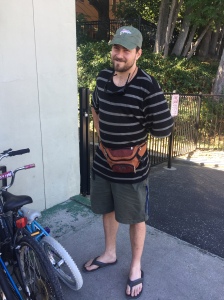 En route to Etna, CA (which seemed to be mostly a crossroads with a few houses and a school) for a halfway point/overnight, we drove towards Lake Shasta, Mount Shasta, the Shasta Dam, and our vision was filled with the huge snowcapped 14,179 foot high semi-dormant volcano. We got rather excited by the human story of the building of Shasta Dam during the Depression. Not to mention the beauty of the dam itself, a testament to some badass engineering and a lot of really hard work. The lake, created by said dam, looked pretty delicious on a 99° day. It seems many of the lakes in California are created by humans, not ancient glaciers or springs or meteors—not even god-like creatures with big feet and magic jazz-hands.

Biggest (not tallest) dam in the country 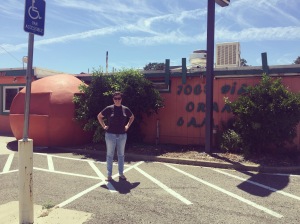 We also went to the headwaters of the Sacramento River—where the water percolates, freezing cold, from a spring. The spot felt very sacred to both of us. We lingered for quite a while, breathing in the ozone-infused air and dipping our feet into the water until numbness hit—in less than ten seconds. We set some intentions, let some things go. And moved on.

The further we got from our time with Win and Heather, the more we looked forward to seeing them again soon, as goodbyes are not as much fun as being together. Nevertheless, we pushed on towards Portland.

The last few days of our trip—Saturday to Monday in Portland and Monday to Tuesday back in Seattle, were glazed ever-so-slightly with melancholy as the sun and crisp air outlined every sweet or inconsequential moment and beautiful thing with dazzle.

Mostly these last days were about people, not places. Examples:

Eventually, we had to say goodbye to Win. He drove off towards Bend and a meet-up with Heather, and Maggie and I drove back to Seattle where we spent the 4th with our friends, Anna and Louise. This fun included an afternoon in the sunshine on Lake Washington, and a long, joyful, speed-boat ride around one end of the massive lake. 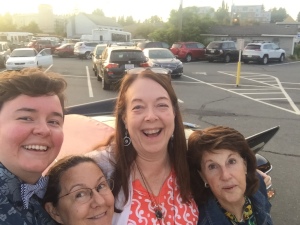 Last night with Anna and Louise!

Lake Washington and me, chillin’

Louise is a badass boat driver!

Ranier was supposed to be behind me but I failed at this pic.

As the sun headed towards the horizon, we were at the airport again, waiting for our redeye. As we flew, we felt sleep deprived and a bit sad. Also a bit happy. Maggie was going home to her girlfriend, her cat, and a new job. I was going back to summertime-as-I-know it. Some work, some play, more work, a little more travel, if I’m lucky, and maybe a few good dates with a few good men.

Final photo…of my kids being together, with me, which is the best part of all.