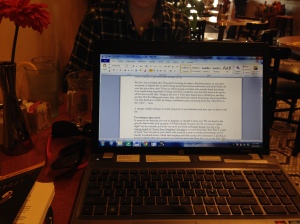 This is my now.

Living in the now has become a buzz-phrase lately. A standard bearer for logic and linear time might wonder, “If we are alive, and unable to time travel, what other damned moment would we be living in?” To someone so tapped into “the flow,” even “now” might be too fluid a concept to pin down and actually live in.

But let’s not overthink this. The point I’m trying to make is that buzz-phrase or not, there are plenty of helpful bits of advice being turned into memes and tweets and book blurbs all over the place these days. There are driven people out there who actually think that being busy equals being important or being stressed is somehow cool, but who want to be up on all the latest trends (like “living in the now”). They have heard stress will kill you, and they get that. But the killing part comes later, after they have retired from being stressed and thus can stop death in its tracks by hiring a meditation guru or learning Qi Gong. They’ll live in the “now”… later.

A strange conflict emerges as smart people try to put relaxation and now-ness on their to-do list.

It seems to me that play just sort of happens, or should. I mean sure. We can head to the gym for that weekly pick-up game of b-ball and play our guts out. Or we can put “game night” on the calendar and invite our most irreverent and funny friends over for a rip-roaring round of “Screw Your Neighbor” but play is so much more than that. Play is a state of mind. You can play in your mind, with yourself, as you re-wonder about things you’ve already wondered about. I think that laughing out loud at your own clumsiness is playful, or turning spilled coffee into a game to see who can get to the floor first, you or the drips. Play is by definition impractical and gives pleasure. I need more of it, that’s for sure. Here’s what I think: don’t try. Just play.

Believe me, letting go is often not easy. Whether it is letting go of lost love or a bad habit, easier said than done. But it seems to me that the struggling and striving we do to let go causes us to hold on harder than ever, without meaning to. I picture someone (like me, many times) straining under the burden of …letting go, so that nothing at all is released and implosion is the only natural outcome. I’d prefer to lie down on the sand inside my mind and open my palms to the sun, until whatever I am holding onto just drifts off on the wind. No struggle necessary.

Strain and strife are antithetical to understanding in many ways. Most of my “aha” moments come when I am open, mind, body, and heart, to the messages available to all of us. Believe me, I’m as guilty as anyone of squinching up my face in an effort to make a round thought make sense in my triangle brain. If I just wait till my brain gets a little rounder, it all makes sense. Suddenly and completely with no squinching. I’ve decided that instead of “trying to understand,” I’ll just allow understanding to fill me.

So much of life today intrudes on the very concept of today. I want today to be itself, a whole 24 hour moment of now that fits nicely with yesterday’s now, and tomorrow’s now. I’m working on it.